In 2006, I went to visit a friend in South Thailand. As part of the trip, we decided to go on a bike ride width-ways across the country from Hat Yai to Tammalang (basically coast to coast at the thin bit) with a stop overnight at a waterfall-come-nature-reserve campsite called Ton Nga Chang.

Thailand is hot, so we started cycling at 3am when the temperature was bareable. We arrived at the waterfall at around 7am and spent the day dicking about in a waterfall. Evening came and we set up our hammocks ready for a night under the stars. As the tourists started clearing out, it became clear we were the only people stopping over. The idea this was campsite, quickly disappated as we realised we would effectively be sleeping in the jungle.

A couple who ran a shop got chatting to us, and quickly told us we shouldn't sleep where we had strung up our hammocks "because of the snakes" and offered us the store room at the back of their shop. We tried to bed down in there, but the continuous scuttling of animals (no idea), the giant insects (I saw a blue and white beetle as big as my fist) made that pretty bleak and I made it pretty clear that our accommodation wasn't gonna work out for me.

Knowing we would need some sleep before another 3am start and a 75km cycle, my friend called his girlfriend (who was Thai) and she had a look online and made some calls. She found a "hotel", about 15-20km back the way we had come. We (I) decided that would be a good plan, and we set off in the wrong direction to find a bed.

We arrived at the hotel about 40 minutes later. The gentleman at reception were surprised to see us, and even more surprised that we wanted a room for the night, as it was customary to hire this place in hours. The hotel was made up of a few small chalets, ours featured a large (hopefully one way) mirror across one wall, a sink, toilet and a collection of small geckos. We slept like babies for about 4 hours.

At 3am we woke up to a nutritious breakfast of Lays Potato Chips. We shared a 300ml bottle of water and saddled up for what was now a 95km ride into darkness. We had to stop a few times, as we were both lagging. When we got to about the 60km mark, in the middle of effing nowhere, we pulled over and our prospects looked... not good. Neither of us sure we could actually carry on cycling without food or water. We were also aware that the sun would be up in about an hour and the temperature would probably go from being about 20-25ºc to 35-40ºc, which would exacerbate our problems. We were in a bit of a pickle, with no choice but to keep on cycling and pray.

As we passed over a hill, in the distant dark was the glow of tube lighting. A small building by the side of the road. A strange service station.

The building had a porch with a few plastic patio tables outside, occupied by a group of men whose faces looked like they worked hard, worked long, and worked outside. Inside the building was a collection of trays, all piled with different breakfast foods. We grabbed bottles of water, plates, and handfulls of food. I don't really remember what, but I do remember a lot of banana leaf parcels, stuffed with a stodgy rice/coconut/banana... thing. Here is what it looked like. 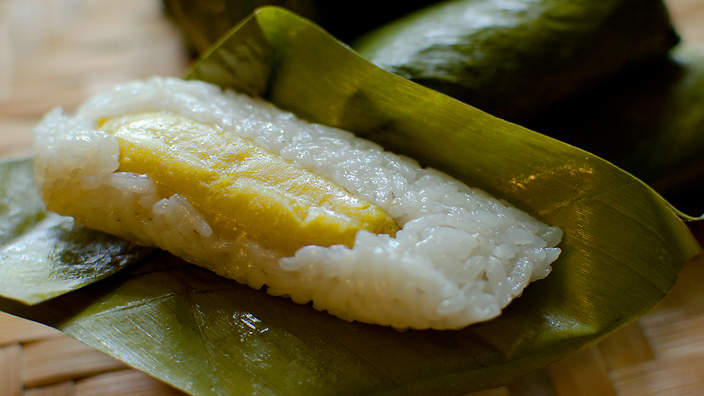 Reader, I could literally feel the energy going back into my body. The best thing I've ever eaten. It was ugly, unspectacular, cheap, and utterly life affirming.

Its all about context...